Levels of human consciousness refer to the vibrational energy level at which a person place or thing functions. Atoms are made of protons, electrons and neutrons. Electrons create movement called energy. This energy is a kind of frequency; similar to that of a radio frequency and has a vibration that can be calibrated to determine what the rate of vibration is (1-1000). The vibration (energy) is easily measurable using Kinesiology.

Pretty much everything in the universe is made up of atoms, including your individual body parts your whole body, your furniture, car, food, books, buildings, thoughts and all other things in existence. Even thought, illness and disease have a vibrational energy level.

Getting in touch with your spiritual side can be a challenge as you try to define what it means to be 'spiritual' in your own life. 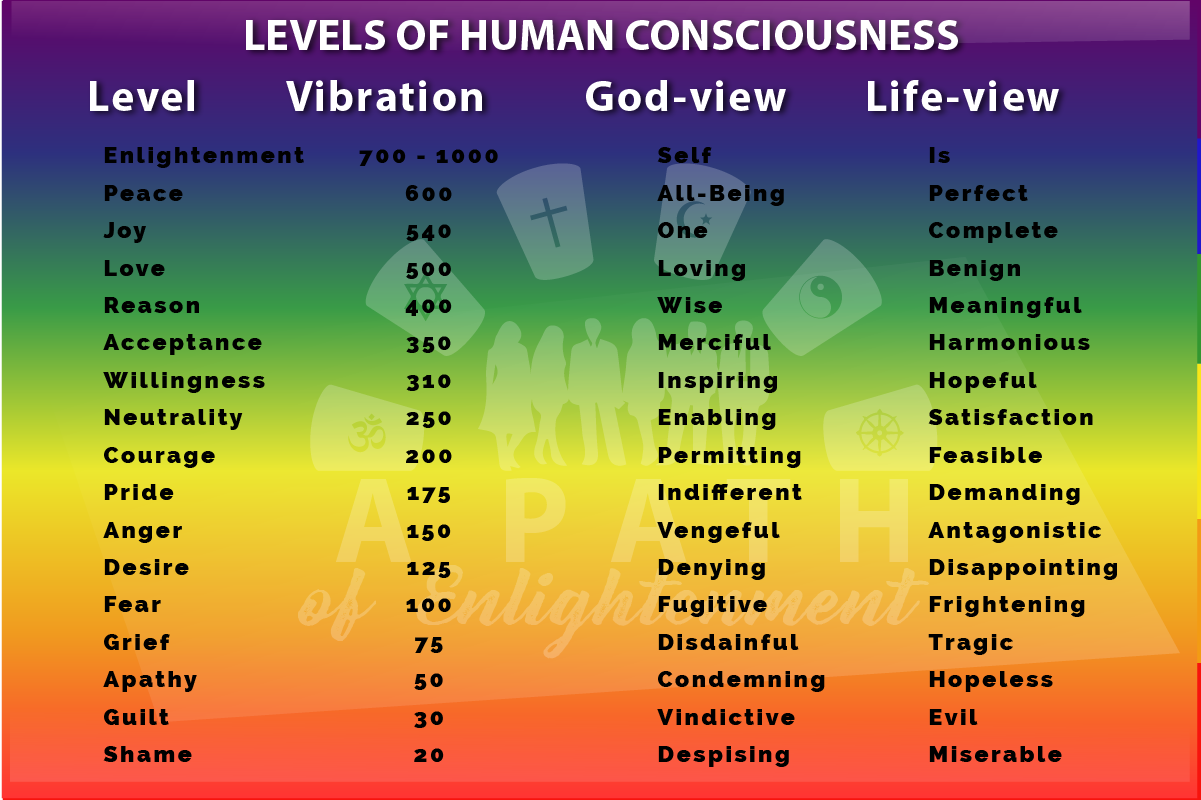 All levels of consciousness are simply put, our awareness of Spiritual Truths (spiritual goodness versus spiritual immorality).

Shame—20—People at emotional Shame level are completely vulnerable to all the negativity of the world and absorb it like a sponge. It is an unhealthy state to be in both physically and emotionally and is the bottom of the totem pole for levels of human consciousness. At this level, a person simply wants to fade into the shadows and hide from all other people because of their feelings of shame and self-loathing over their choices and experiences. This is not just a state of self-pity and self-hate, but also a state of depravity that often correlates with self-cruelty and cruelty to others. People in this level of consciousness often battle with paranoia, delusions and psychosi.

Guilt—30—People functioning at Guilt level are barely above the level of shame. Spiritual awareness is barely heightened, and they are unforgiving of themselves. Guilt often manifests itself as sorrow and remorse and makes them see themselves as victims. People at Guilt level might contemplate suicide or experience psychosomatic illnesses. At this level of consciousness, they live in an almost-constant state of denial. Prisoners may experience this level of guilt relevant to their crime and those suffering from Clinical Depression may also function on Guilt level.

Apathy—50—People experiencing Apathy level find themselves indifferent and stuck in a state of hopelessness and despair while feeling helpless to change their life circumstance. This level usually finds people living in extreme poverty or homeless while feeling the world has moved on and left them behind and forgotten.

Grief—75—People in this level of consciousness find sadness filling their life and leaving little room for other feelings. Depression and constant feelings of loss drive all emotions. We often find people who have become habitual losers at everything they try in life, functioning at this level. Addicted gamblers gather here too, working hard to win at something in their life; needing that one win to prove their worthiness. Regret fills the day in the life of anyone at grief level and this is the same level that nearly everyone experiences after the death of someone very close to them. Grief is depression in a purer sense of the word. People suffering the loss of a loved one will lift themselves naturally from this level as time passes after the loss. These grievers may find themselves bouncing back and forth from this level to their normal level (prior to the loss) until enough time passes. Time spent at this level for grievers become less often and shorter periods as time puts distance between the loss and the current time.

Fear—100—Sadly, Fear runs most of the world and spreads like wildfire. People functioning at Fear level see the world as hostile and a thing to be constantly dreaded. The insecure feelings that fear manifests, causes people at this level to be manipulative, scheming, calculating, jealous and inhibited.

Desire—125—People functioning at Desire level find themselves never having enough material possessions. Desire Energy is found driving human action around the globe, including the economy, at this level of human consciousness. Monetary longing at this level is out of control and is insatiable as it co-exists with greed. Addictions to wealth, dominance, and status are commonplace and run the lives of those operating at this level. They value only external things and have little or no comprehension about their own internal value.

Anger—150—People raising their level of consciousness from Desire, often find themselves in Anger level because insatiable Desire leaves them unsatisfied and frustrated when they find it is impossible to stockpile all their greedy interests. Frustration is an outlier of Anger, and as such, these people are hot-tempered, unpredictable and likely to explode in fury at any moment. Anger fuels hate and hate fuels violence. This is also the level that is the point at which people can elevate themselves to freedom from oppression and tyranny because anger is often the catalyst that allows the soul to fight upwards and conquer those holding them down by raising their own level of human consciousness.

Pride—175—People find themselves actually feeling good at Pride level. The lower levels dream of reaching this level so they can rise above their feeling of shame, guilt, apathy, grief, fear, desire and anger. However, Pride level is full of dissention. Everything is an argument and the argument’s goal is to be right. You guessed it! This is the level of the know-it-all that is always right. Know-It-Alls, obsessive about their own religious and political ideas are the creators of religious wars and political terrorism. These religious fundamentalists and extremists feel they are not only in the right, but that they have found truth. Their beliefs are false and usually cause great harm and death. Pride level makes it impossible to conquer addictions of any type. In this level, you are dependent on the external and your spiritual state is fragile if not invisible.

Courage—200—People are empowered at Courage level because with courage comes the evaluation, study and exploration of everything. With analysis comes achievement, self-worth and willpower. Daily life at this level becomes thought-provoking and interesting. This phase of spiritual growth creates productivity.

Neutrality—250—People in Neutrality level gain the ability to rise above fierce opposition to everything and their need to be right about everything. The process of becoming flexible begins here. Former feelings rooted in fear, defeat and anger are conquered and self-assurance grows. Those in this level of consciousness are no longer interested in rivalry and disagreement. Finally, fixation with judgment loosens its grip and makes way for evolution into a non-judgmental approach to life.

Willingness—310—Open-mindedness is borne in Willingness level; for this is the portal to higher awareness, understanding and insight. Spiritual growth is vast. People are willing to help wherever life takes them and display sincere friendliness along the way. They have self-correcting personas and do not struggle through spiritual learning blocks.

Acceptance—350—Amazing spiritual transformation takes place during Acceptance level. There are no victims here. Everyone is accountable and responsible for their own choices and there is no blame. People flourishing on this level are unruffled by life’s daily happenings, adaptable to most circumstances, inclusive of all kinds of people and always pleasantly agreeable.

Reason—400—Once rising above the lower emotional levels of consciousness, rational, intelligence takes over. People functioning in Reason level are capable of digesting enormous amounts of information and making brilliantly sound decisions that forge the path for humankind to a new and better time. Because of the increased capacity for forming concepts and ideas and understanding complex matters, this level of human consciousness is filed with doctors, scientists and other professionals dedicated to influencing and lifting humankind to new heights.

Love—500—Augmenting the positive in the world while being sympathetic, encouraging and supporting is the way of those in Love level. Love is perpetual and static here. All love comes from within and is not dependent upon external factors. The unconditionality of love prevails regardless the external environment or circumstance.

Joy—540—Inner Joy begins as love finds it way upward to an unconditional state and peaks as internal bliss. Joy level provides immense ability for patience, kindness and benevolence. This level is filled with spiritual healers, advanced spiritual students, saints and spiritual gurus. Divine-will fuses with humans at this level, creating people with the compassion of Mother Theresa at this level.

Peace—600—People functioning in the energy field of Peace have no specific awareness of subjectivity and objectivity. Spiritual knowledge, and fulfillment of one’s own human potential steps up to God-mindfulness internally and externally.

This content is an excerpt from the book THINK IT SO! © Jan Cohen 2000 and is published with her permission.